You’re Cute and Fired (from the NY Times) 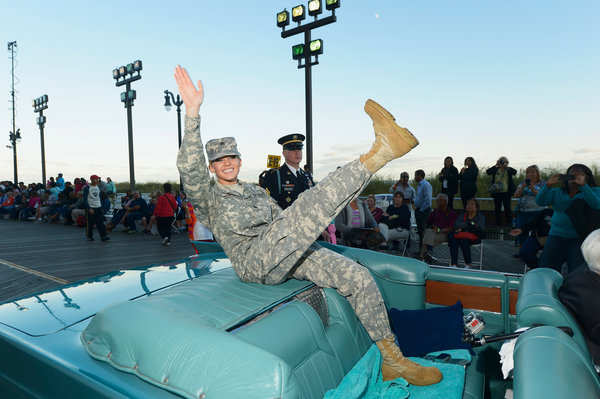 Theresa Vail, an Army National Guard sergeant, was Miss Kansas in the last Miss America pageant. She believes beauty and the military can coexist.

Does it really pay to be beautiful? Unless you’re a model, perhaps not.

Last week, Col. Lynette Arnhart expressed her distaste for a photo of Cpl. Kristine Tejada of the First Cavalry Division that ran in the November issue of Association of the United States Army magazine, according to a leaked email exchange picked up by the website Politico. The picture, which accompanied an article about a program to encourage greater gender parity in combat roles, depicted Corporal Tejada on security detail in Iraq while wearing carefully applied eyeliner and lip gloss.

Colonel Arnhart, who was leading a team of analysts studying the integration of women in combat, wrote that “such photos undermine the rest of the message (and may even make people ask if breaking a nail is considered hazardous duty).”

By Friday, Colonel Arnhart had been reassigned, but her opinion had already ignited the Internet. On Jezebel, one commenter compared it to a surgeon showing up “in a micromini, stilettos and halter top,” adding, “you can’t tell me that wouldn’t raise your eyebrows and make you question your choice of surgeon at least a little.”

Chloe Angyal, a senior editor at Feministing.com, thinks the controversy exposes a double bind in society. “You have to be beautiful to matter, but beauty can and will be used against you,” she said.

The question of whether women can be too attractive for their jobs has come up several other times recently. Over the summer, Olivia Sprauer, a high school teacher in Florida, was forced to resign after photos of her posing in a bikini were found by her principal.

And last week, The New York Post reported that a yoga teacher, Dilek Edwards, filed court papers over her dismissal from a chiropractic clinic. Charles Nicolai, the owner of the clinic with his wife, Stephanie Adams, had told Ms. Edwards that his wife might become jealous of her on account of being “too cute.” (Ms. Adams denied the allegations.)

“This takes ‘she was asking for it’ to a whole new level,” Ms. Angyal said, adding: “  ‘What is she doing walking around with a face like that?’ Perhaps we shouldn’t let men run businesses and have the nuclear launch code if you can’t handle someone who has a pretty smile and nice breasts.”

After James Knight, a dentist in Iowa, fired his assistant Melissa Nelson because he found her “irresistible” and a possible threat to his marriage, according to reports, her subsequent suit made it to the state’s all-male Supreme Court. Over the summer, the justices affirmed that Mr. Knight was within his rights, writing in their opinion that “close personal relationships between men and woman can often produce personal emotions and conduct that are unfamiliar to the workplace relationship.”

Debora L. Spar, the president of Barnard College and author of “Wonder Women: Sex, Power, and the Quest for Perfection,” finds these cases “absurd, full stop.”

“It’s insane that in 2013 the fact of women’s appearances is having this much weight in the workplace,” Ms. Spar said. “As long as people are generally adhering to the norms of the workplace, the fact that they wear more or less makeup or slightly shorter clothes is their personal decision.”

Jack Tuckner, a civil rights lawyer in Manhattan’s financial district who represented Debrahlee Lorenzana when she sued Citibank a few years ago for firing her for being too attractive, said, “It’s quite Victorian, this idea of ‘Let’s run this woman out of town on a rail before our own desires get the better of us.’ ”

But Sylvia Ann Hewlett, the author of “Forget a Mentor, Find a Sponsor,” is more pragmatic: “Many powerful senior men feel nervous about having a female protégé out of fear there will be assumptions about an affair.”

Her advice? “Meet the wife.”

A version of this article appears in print on December 1, 2013, on page ST8 of the New York edition with the headline: You’re Cute and Fired.